As of today, Microsoft has officially ended the support for Windows XP and it will no longer receive any security updates. Even with the updates, XP has never been a secure platform and by now users should really stop using it. But what should people install instead? Our recommendation is Lubuntu.

Windows XP has finally reached its end-of-life. Most people have probably already bought new computers that come preinstalled with a newer version of Windows and others have had the wisdom to move to another operating system for a long time ago. Considering the licensing model, performance and ease of use in newer Windows versions, it is completely understandable that there is a large amount of people who have decided to stick to XP for a long time. But now they must upgrade, and the question is, to what?

It is obvious that the solution is to install Linux. It is the only option when the requirement is having a usable desktop environment on the same hardware as XP was used on. But the hard choice is what Linux distribution to choose. For this purpose Seravo recommends Lubuntu version 14.04 (currently in beta-2, but final release coming in just a few weeks).

Why? First of all the underlying Linux distribution is Ubuntu, the worlds third most popular desktop operating system (after Windows and Mac). The big market share guarantees that there are plenty of peer users, support and expertise available. Most software publishers have easy to install packages for Windows, Mac and Ubuntu. All major pre-installed Linux desktop offerings are based on Ubuntu. And when you count in Ubuntu’s parent distribution Debian and all of the derivative Linux distributions, it is certainly the most widely used Linux desktop platform. There is safety in the numbers and a platform with lots of users is most likely maintained, so it is a safe choice. Ubuntu 14.04 is also a long term release (LTS), and the publishing company Canonical promises that the base of this Ubuntu release will receive updates and security fixes until 2019.

However we don’t recommend the default desktop environment Ubuntu provides. Instead we recommend to use the Ubuntu flavour Lubuntu, which comes with the desktop environment LXDE. This is a very lightweight graphical user interface, meaning it will be able to run on machines that have just 128 MB of RAM memory. On better machines LXDE will just be lightning fast to use, and it will leave more unused memory for other applications to use (e.g. Firefox, Thunderbird, LibreOffice etc). Also the default applications in Lubuntu are chosen to be lightweight ones, so the file manager and image viewers are fast. There are also some productivity software included like Abiword and Sylpheed, but most users will rather want to use the heavier but more popular equivalents like LibreOffice Writer and Mozilla Thunderbird. These can easily be installed in Lubuntu using the Lubuntu software center.

Note that even though Lubuntu will be able to run on very old machines as it gets by with so little resources, you might still have some difficulties installing it if your machine does not support the PAE feature or if there are other hardware which are not supported by the millions of Linux device drivers that Ubuntu ships with by default. If you live in Finland, you can buy professional support from Linux-tuki.fi and have an expert do the installation for you.

Why is Lubuntu the best Win XP replacement? 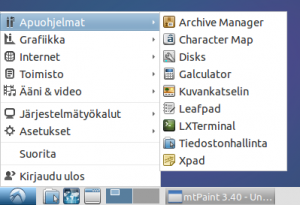 First of all Lubuntu is very easy to install and maintain. It has all the ease of use and out-of-box security and usability enhancements that Ubuntu has engineered, including the installer, encrypted home folders, auto-updates, readable fonts, stability and other features which makes up a good quality experience.

The second reason to use Lubuntu is that it is very easy to learn, use and support. Instead of the Ubuntu default Unity desktop environment Lubuntu has LXDE, which looks and behaves much like the classic desktop. LXDE has a panel at the bottom, a tree-like application launcher in the left lower corner, a clock and notification area in the right lower corner and a panel for window visualization and switching in the middle. Individual windows have their manipulation buttons in the right upper corner and application menus right inside the application windows and always visible. Anybody who has used Windows XP will immediately feel comfortable: applications are easy to discover and launch, there is no need to know their name or category in advance. It is easy to see what applications are open and to switch between them with classic mouse actions or using simple Alt+Tab shortcut. From a support perspective it is easy to ask users by phone to open menu File and Save as and so on, as users can easily see and choose the correct menu items for the application in question.

The third reason is that while the LXDE is visually simple, users can always install whatever application available in the Ubuntu repositories and get productive with whatever complex productivity software they want. A terminal can be spawned in under a second with shortkeys Ctrl+Alt+T. Even though LXDE itself is simple, it won’t hamper anybodys ability to be productive and do complex things.

The fourth reason is that when using Lubuntu, switching to a more modern desktop UI is easy. On top of a Lubuntu installation a admin can install the gnome-session package, and then users will be able to choose another session type in the login screen to get into Gnome 3.

Some might criticize LXDE that it does not have enough features. Yes, in LXDE pressing the keyboard button Print Screen will not automatically launch a screenshot tool nor dragging a window to the side of the screen will not automatically make the window into a perfectly aligned half screen sized window. But it is still possible to achieve the same end results using other means in LXDE and all the important features, like system settings, changing resolution, attaching external screen, attaching USB key and easy mounting and unmounting etc are all part of the standard feature set. In fact the lead developer of Lubuntu has said he will not add any new features and only do bug fixes. It could be said that LXDE is feature complete and the next development effort is rewriting in Qt instead of the current GTK2 toolkit, a move that will open new technological horizons under the hood, but not necessarily do anything to end user visible features.

Another option with similar design ideas is XFCE and the Ubuntu flavour Xubuntu that is built around this desktop environment. Proponents of XFCE say it has more features than LXDE but most of those features are not needed by average users and some components, like the file manager and image viewer, are more featureful in LXDE than in XFCE and the features in those apps are more likely to be actually needed. However the biggest and most striking difference is that XCFE isn’t actually that lightweight, and to run smoothly it needs a computer that is more than twice as powerful than what LXDE needs.

Our fifth and final reason to recommend LXDE and Lubuntu is speed. It is simply fast. And fast is always better. Have you ever wondered how come computers year after year feel sluggish even though processor speed is doubled each 18 moths according the Moore’s law? Switch to LXDE and you’ll have an environment that is lightning fast on any reasonable modern hardware.

Getting Linux and LXDE

LXDE is available also in many other Linux distributions like Debian and OpenSUSE, but for the reasons stated above we recommend installing it downloading Lubuntu 14.04, making a bootable USB key of it (following simple installation instructions) and installing it on all of your old Windows XP machines. Remember though to copy your files from XP to an external USB key so that you can later put them back on your computer when Lubuntu is installed.

17 thoughts on “The best replacement for Windows XP: Linux with LXDE”