Some years ago Nokia conducted a large survey among its customers on what people most liked about Nokia phones. One of the top features turned out to be their unrivaled battery life. Despite the hype around screen resolutions, processor performance and software versions, one of the most important features for a mobile device is simply how long until you have to charge it again. 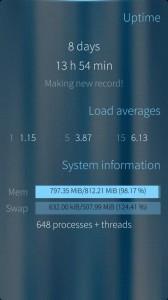 Back in 2012 we wrote about how to get an Android phone last for a week without recharging. On a mobile phone, the single most significant power hog is the display. On the other hand with the display turned off, the biggest energy hogs are the wireless radio devices. The Android phone in our example lasted for an entire week after locking it in 2G mode only, thus utilising only the most basic GSM network connection with all other forms of connectivity disabled.

The Nokia Maemo series devices and the Meego N9 smart phone already sported a feature where if the device was not in active use, it would automatically downgrade the network connections or disable them. When a user the opened an application that requires network access, the network was re-enabled automatically without extra user intervention. This feature is also present in Jolla phones. This is the reason why Jolla users every now and then see the “Connecting” notification; the connections are disabled but are automatically invoked upon request for network access.

We tested this feature by having all networks (3G, WLAN, Bluetooth, GPS) enabled in the Jolla phone settings and by having e-mail updates active with instant message presence turned on, but with no further active usage of the device. The results showed that the Jolla phone battery lasted for over 8 days! The screenshot attached is from SailTime by Mikko Ahlroth, which visualises the output of the uptime Linux command.

But wait, that was not all! The unique hardware feature present in the Jolla Phone is, of course The Other Half (abbreviated TOH), an exchangeable back side of the device. One of the connectors of TOH is a I2C connection, which is able to transfer both data and power. This makes possible TOHs that supplement the main battery within the device. In fact, the main battery is also located on the backside, so it could completely be replaced with a TOH that connects directly to the connectors the original battery would use.

First examples of this have already emerged. Olli-Pekka Heinsuo has created two battery supplementing Other Halves: the Power Half, which holds an extra battery for increased capacity and the Solar Half, which hosts a solar panel that directly charges the device. Olli-Pekka is attending the Seravo sponsored Jolla and Sailfish Hack Day next Saturday. If you wish to attend, please make sure to swiftly register to the event as the attendance capacity is limited!

One thought on “How’s (battery) life with Jolla?”