Update October 2013: We bought a new Dell XPS 13 in October with Ubuntu pre-installed but unfortunately it seems to have problems with the wireless: wifi connections seem to disconnect at random and thus wifi is useless. We found out that the in the new laptop shipped to us this fall the Intel wifi card has been replaced with an Atheros wifi card, which unfortunately does not have a proper Linux driver, thus the connection issues. It seems Dell has been aware of Atheros wifi card problems since July as a thread in the Dell support forum shows, but still they ship the “downgraded” crappy model. With some tweaking, you may or may not get the Atheros wifi model working.

As the whole point of buying a pre-installed Linux laptop is to get hardware that is guaranteed to work with Linux, we can no longer recommend this laptop. It is a shame. Our earlier Dell XPS 13 still works perfectly as it has the Intel wifi card.

We received our first Dell XPS 13 Ubuntu Edition laptop last week. We decided to publish a quick review on it, as it is a very impressive product and in general every pre-installed Linux laptop is newsworthy as they are so rare, at least here in Finland.

This Dell XPS 13 Ubuntu Edition was released early this year globally and this month it became available in Finland. It is actually already the second generation in a Dell-Canonical-cooperation on creating the ultimate laptop for web developers.

We purchased our piece directly from Dell Finland but they only sell to corporate customers, so if you are a private person you need to buy from one of their re-sellers. After calling around all the re-sellers in Finland we found out most resellers refuse to sell the Ubuntu model, only two of sell it on request, and only a single re-seller has it readily available as an ready to order item on their website. We recommed every Finnish Linux users to visit www.teraset.net/linux.php which lists three pre-installed Dell models ready to order.

From package to ready-to-use in less than 20 minutes

When we finally got the device, the experience was great. It arrived a week earlier than promised, neatly packaged and ready to use with full battery and pre-installed Ubuntu. The version of Ubuntu is 12.04 with some Dell additions, among others a Dell end user license agreement screen inside the standard Ubuntu first-boot installer. There was also a cool animation on the first boot which we’ve never seen before in the standard Ubuntu OEM-installer. The default file system was ext4, which is probably in 12.04 still a better choice than btrfs. The default partition layout included some Dell specific recovery partitions, but we didn’t test how they work so we can’t say how useful the feature is. The level of localization was good and a Finnish speaking persons would have no problems in setting up and running their Dell XPS 13 Ubuntu Edition laptop. In general, the overall user experience of the product from packaging to having it fully running and configured was excellent, beating anything we’ve ever seen before. The whole process was also really fast, from opening the package to using the laptop it took less than 20 minutes. The only thing where there is room for improvement is that the keyboard still had an Windows button, but luckily we had Linux stickers to cover it. This is one of the details that Linux-only laptop sellers like ZaReason and System76 do better, but otherwise nobody else can offer an ultrabook anywhere close to the Dell XPS 13. We also noticed that the Getting Started -leaflet included only instructions on how to get started with the Windows 8 version of the Dell XSP 13 laptop and nothing about Ubuntu was mentioned, but that we can forgive as we understand that grasping Windows 8 is difficult and many users install the open source Classic Shell in Windows 8 while Ubuntu is user-friendly enough to get by without any printed manuals.

Externally the Dell XPS 13 reminds quite a lot an MacBook Air, but slightly better. The size of the laptop is just perfect: it long edge is one centimeter shorter on a 13 inch MacBook Air but unlike the smaller 11 inch MacBook Air, Dell XPS 13 is still big enough to have a decent screen size and there is very little marginal from the screen edges to the case edges, so all space is efficiently used in an optimal way. Also the screen resolution of 1920×1080 pixels (full HD) is excellent and significantly better than the 1366×768 or 1440×900 common in laptops with similar physical dimensions. Dell XPS 13 is also big enough to host a full sized keyboard which makes it pleasant to use. As the device is so thin, there is no room for a DVD tray, but in the rare occasions you might need one, you can use an external CD/DVD drive. There is also no ethernet port, but that too can be achieved with an external USB dongle if needed. Also there are no dock connectors in the bottom of the laptop, but even when one of our previous Dell laptops had the dock connectors, we never came around to buy a docking station, so we won’t be missing that feature either. The essential connectors that one really needs are exactly the ones found on this device:

The Dell XPS 13 has also a neat hardware feature we haven’t seen before: a button you can press and a led scale that will indicate the battery charge level, even when the laptop is turned off.

As the laptop is Ubuntu certified, all the keyboard function buttons work as expected and you can for example turn on and off the keyboard backlight  The trackpad feels nice and works nicely with the multi-touch trackpad Linux driver, enabling two-finger scrolling in both directions. Naturally the Linux drivers for everything else was also working perfectly.

The SSD disk has TRIM support, but for some reason if was not enabled in the Ubuntu install by default. Even though we haven’t  yet noticed any problems with drivers, it is comforting to know that on Launchpad.net there is a custom Sputnik kernel PPA and all the Dell XPS 13 related bugs are carefully followed. We are sure no other laptop gets that much attention from Canonical engineers. Since fixed go upstream to mainline Linux, this laptop is an excellent choice also for users of other Linux distros, like Debian or OpenSUSE.

Performance-wise this laptop came with:

The Dell XPS 13 Ubuntu Edition is a bit more expensive than the cheapest  MacBook Air, but it packs with more impressive hardware, so the Dell XPS is well worth its price.

When it comes to laptops, one feature we in particular value is battery life. A previous Dell Latitude E5420 (a pre-installed Ubuntu model bought in 2011) with a 9-cell battery we have had as new a maximal battery life of 9,5 hour. With this much smaller Dell XPS 13 with a 45  Wh battery we get a maximal 11 hours battery life. The power usage is pretty well optimized out-of-the box, and after installing TLP, tweaking a little with Intel PowerTop and having the screen backlight turned off (which leaves text on the screen still readable) we got a power consumption figure as low as 4,7 watts and calculated battery life of 670+ minutes.  Amazing! Of course this figure is only valid if you sit on a long flight and spend all 11 hours only reading a simple text document. In reality while working you’ll have three virtual machines running, nine shell windows and twenty browser tabs open, so you’ll battery wouldn’t last the whole day, but luckily the power adapter of Dell XPS 13 is smaller than anything we’ve seen before and weights only 280 grams, so your whole toolkit with laptop and power adapter with cables will be just a mere 1,5 kg in total.

We also tried to measure how much power it draws in standby, but after having it over the weekend in suspend mode, when we opened it the battery status indicated the same level as at the time when the lid was closed. We could not calculate how long the battery lasts when the laptop is suspended, but we guarantee it is long enough, probably weeks. Besides, it only takes 13-16 seconds to boot, so doing a real shutdown won’t loose you much time either if you prefer it (for example due to security reasons).

USB gives power even then laptop is shutdown.

One small glitsh in packaging fixed

Nice leds indicate power in cord and charging or ready

Packaging. Note how small the power adapter is. 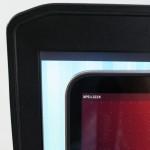 A small fan can be seen in the bottom, but the laptop is practically soundless.

Here are boot and suspend videos to give you a sense of the speed:

Where to buy pre-installed Linux laptops and other computers?

Currently the best directory of vendors can be found at Linuxpreloaded.com. If you live in Finland we recommend either the pre-installed Ubuntu computers from Dell or alternatively GGS-Data, a Swedish company that ships to Finland and provides keyboards and power plugs that suites Finns.